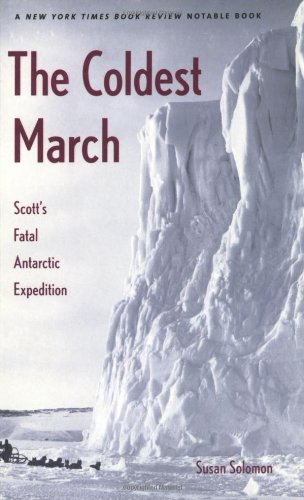 The icy deaths of Robert Falcon Scott and his companions on their return from the South Pole in 1912 made them English icons of courage and sacrifice. Soon, however, Scott’s judgments and decisions were questioned, and his reputation became one of inept bungler rather than heroic pioneer. Susan Solomon, senior scientist at the National Oceanic and Atmospheric Administration in Colorado, approaches Scott’s story from a meteorologist’s point of view. She shows that the three weeks from February 27 to March 19, during which the explorers fell further and further behind the daily distances they had to cover in order to survive, were far colder than normal. Unusual blizzards of wet snow had already slowed the party and depleted their provisions and strength. Without these once-in-a-decade phenomena, Solomon believes the party would have returned to its base on the Ross Sea–second after Roald Amundsen in the race to the Pole, but safely. She opens each chapter with comments from a hypothetical modern visitor to Antarctica, presumably to give a wider context to the human drama of the last century, though this reviewer finds them inappropriate. She enriches her narratives of Scott’s two Antarctic expeditions with vintage photographs and tables of meteorological data that highlight the explorers’ achievements. Their determination was pitted against the worst weather in the world. Scott’s story has been told many times before, but its weather information makes The Coldest March a useful addition to the literature.