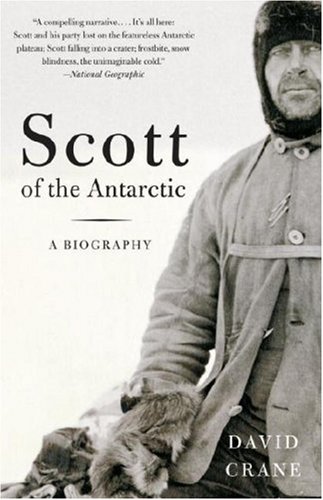 If ever a man needed saving from the enthusiasm of his admirers,” Crane begins, “it was Scott.” But although this hefty biography strips away much of the legend and mystique surrounding the polar expeditions of Robert Falcon Scott, it’s still infused with hero worship. In addition to his leadership skills, Crane claims Scott was the only polar explorer to possess significant literary talent, and his writings—especially the final message scrawled as he lay dying in the Antarctic wastelands—”extend our sense of what it is to be human.” The twin centerpieces of Scott’s story are, of course, his two expeditions to Antarctica, both of which are recreated here with meticulous detail. Crane understands, however, that Scott’s accomplishments in the polar region were shaped by his earlier experiences in the Royal Navy; thus the narrative is equally strong in recounting how Scott was able to overcome fierce opposition to his leadership of the first trip and how the rivalry with former crewmate Ernest Shackleton spurred the second. “Personality and character went on playing a decisive role in polar exploration long after it had been relegated to the margins of other history,” Crane writes, and for all the dramatic action, it is Scott the man who most captivates the author—and readers.